Unfortunately damp on internal walls can be a major problem for many homeowners because when a property has damp it alters the atmosphere within the house. Damp, or general dampness, is often accompanied by an unpleasant musty smell as well as chilly air. This is because damp patches on walls can reduce the home’s ability to insulate heat.

Damp on internal walls can produce mould that looks poor and is detrimental to your health. Mould produces harmful spores that are released into the air and can possibly cause respiration problems. Besides these commonly known issues, homeowners stand the risk of structural damage to their property, which can also make the plaster, paint and other finishes deteriorate quickly.

If you ever noticed the signs of damp on the walls of your home, then it is strongly advised that you act quickly to resolve the damp issue. Not only is damp on the internal walls unsightly, but it is also unhealthy and is the number one cause of timber decay in homes. Damp on internal walls and timber decay can put your home at a higher risk of structural damage. 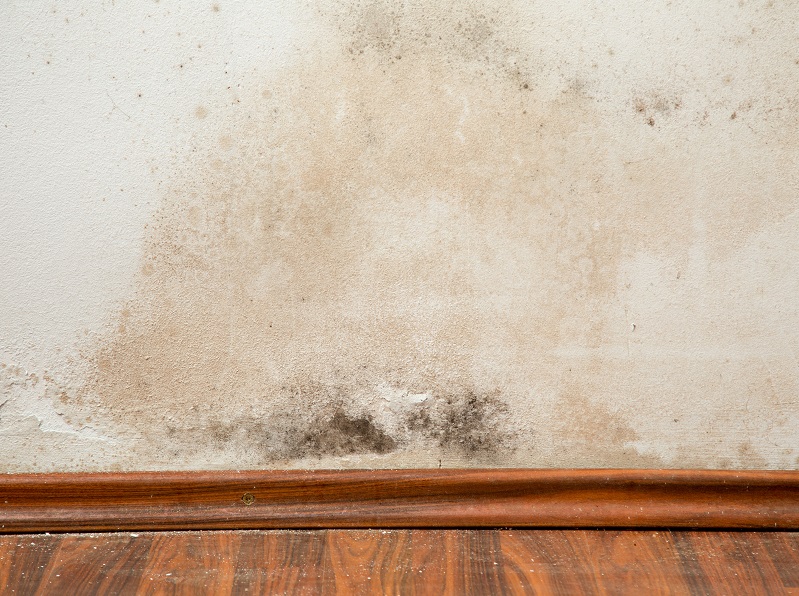 What Causes Damp In Internal Walls?

Junctions and roofs are also places that should be checked for penetrating damp because water can seep into faulty mortar fillets, lead flashings, ridges or hips. Internal spillage is the result of any water that overflows from baths showers or sinks, water from birth pipes, water from leaky pipes or washing machine or appliances and even accidental damage.

Below ground damp could be rising damp. This type of damp is not as common as the other types, but it’s not impossible to see. In this case, floors become damp because  moisture has evaporated from below and is inhibited by vinyl sheet, rubber backed carpets, or various other coverings.

How To Diagnose Damp on Inner Walls

To diagnose damp on inner walls you should check your roof during wet and windy weather to determine if a spot on the ceiling is a damp ceiling patch that is due to a leak in the roof or condensation from the weather. Broken slates, tiles and other debris on the ground or daylight seen inside lofts can also indicate potential roofing problems.

Check your plumbing to ensure there are no leaks. One way to check for leaks is to meter your water bill. If you have unusually high water bills or are constantly refilling the tank, you may have leakage.

When the internal walls of your home become damp, they create the perfect conditions for damp mould spores, and these spores are the worst kind of spores. Some types of damp mould can be deadly and they exist in an alarming number of homes across the UK.

What Are The Different Internal Damp Proofing Options?

The first thing to do when fixing damp walls is to investigate and find the root of the moisture. To identify where the moisture is coming from, you will need to do a thorough check of your home, both inside and out.

It’s not always easy to decide what to look for and the most ideal internal damp proofing methods and products to apply to make your home damp-free. One way to ensure that your home stays damp free is through the use of damp proof membranes. Damp proof membranes are made from plastics such as HDPE, which resist moisture and moisture vapour. The membrane surface is formed into a stud formation similar to an egg box. This surface creates air gaps that allow moisture to evaporate from the wall without leaving damp behind on the wall.

Cementitious tanking was created primarily for use in walls below ground level, specifically the waterproofing of basements, tanks, and ducts. This type of damp proofing is applied to the internal face of the structure and can be used on many surfaces including concrete, stonework, brickwork and block work.

The application of renovating plaster, a plaster that is a premixed lightweight backing plaster, is another way to control dampness that passes through walls of older homes. The properties of a renovating plaster are similar to a 1:1:6 render (cement: line: sand), but in place of the sand, Perlite aggregate is used, which makes this plaster light and simple to use.

Get Help For Damp And Inner Walls

Contact Southern Damp Proofing at 020 7971 1329 if you need any assistance in finding the causes of condensation or damp patches on your internal walls. We are able to provide further information on how to stop your walls from getting damp.

We have local specialists across the UK who can offer free advice and recommend the right products and solutions for your property.

When Should I Use Anti-Mold Paint?
The use of anti-mould paint is ideal for walls and ceilings in homes as well as commercial and public buildings. Anti-mould paint features a fully washable and resistant to moisture barrier once the paint has fully dried.
When Should I Use Renovating Plaster?
Renovating plaster can be used for plastering traditional background surfaces during renovation work. Renovating plaster should be applied shortly after the installation of a new damp proof course system or in conjunction with basement tanking systems. Renovating plaster is best suited to be used in older properties and, unlike other products, can be applied to existing damp walls.
When Should I Use Cementitious Tanking?
Cementitious tanking is designed for use in walls below ground level, specifically for waterproofing basements, tanks, and ducks. This dampproofing is applied to the internal face of the structure and can be used on a variety of surfaces including concrete, stonework, brickwork and block work.
When Should I Use Damp Proof Paint?
Damp-proof paint can be used to combat a variety of damp proof problems, but should only be applied after the root cause of the damp has been fixed. The paint can be applied to multiple surfaces including cement, brick, plaster, and concrete.
When Should I Use Damp Proof Membranes?
If you have walls that have evidence of salt or damp walls then you first need to remedy the cause of the damp. Once the root of the damp problem has been rectified, then you can take off the old plaster and fix any damaged surfaces.
How Much Does It Cost To Damp Proof Inner Walls?
Most of the cost involved in damp proofing internal walls comes from replastering a decoration. Costs can vary widely between different areas and different suppliers. The costs will increase if you want the whole house or every wall treated. However, if you have the plastering and decorating done separately after treatment has been completed, then the cost can be cheaper.